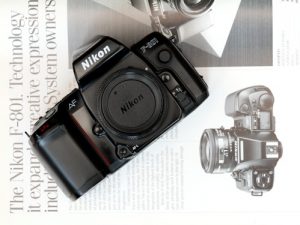 Although most of my career has been spent as a photographer, I have, as mentioned elsewhere, also felt honoured to work for two big names in camera manufacturing; Olympus and Nikon. In both instances it was for my photographic skills and technical knowledge, not in sales or marketing.

So as the ‘Advisor Of Photography’ for Nikon UK in the Spring of 1988, an amazing time started with the launch of the Nikon F-801. And alongside, the significant SB-24 Speedlight. Followed late in the year by the new flagship F4 series.

The F-801 was Nikon’s first modern ergonomic design, although the F-301 and F-501 started a process with integral motor drives and other ergonomic changes from previous generations.

First on a Nikon was a ‘Command Dial’, something we have since seen on most Nikon models of film and digital cameras. Other aspects new to photography in general, that still look bang up to date over three decades later, included a jaw dropping 1/8000th second top ambient exposure shutter speed. This is unsurpassed on many SLR and EVF cameras today. Add a 30′ second maximum shutter speed in manual control, not forgetting ‘bulb’ , and again, very modern looking.

Matrix metering, while not the first multi pattern option, was still the first to really capture serious photographers attention. Enhanced further with TTL Flash control for ‘fill-in flash’ or ‘standard’ TTL exposures with the SB-24. The two basic TTL mode choices, most cameras and Speedlights follow today. Not rock solid by any means, (I have yet still to see any camera that is across subjects with TTL Flash for all it’s benefits), but a big step forward nevertheless.

Single point autofocus driven till something was in focus before allowing the shutter to be depressed in Single Servo mode, or anytime while the AF drove continuously (Continuous Servo) was a big feature. Manual focus and a choice of three different focusing screens enhanced it’s ‘pro’ appeal. As did the high-eye point viewfinder, which at the time, was not usually seen in any but top of the line models. The finder magnification is also lovely to work with.

The official launch in the UK was on April 1st (yes) at ‘Stringfellows’, the famous London night club. Nikon hired the venue during the day.

I remember among other things that the assembled photographers, photographic retailers, armed forces personnel and the photo magazine editors, gasped in disbelief when the top shutter speed was announced. It was that boundary pushing.

But Mr Stringfellow got the biggest laugh, when he said that he was not much into photography, but that he did have a collection of ‘Polaroid’s’.

Up to 3.3 frames per second shooting speed, four AA cells as the power source, plus optional MF-20 & MF-21 data and multi function backs made this a top end enthusiast camera with genuine ‘pro’ appeal. And one that still looks for film capture, very up to date in crucial photographer focused ways. A testament to a design now over thirty years old.