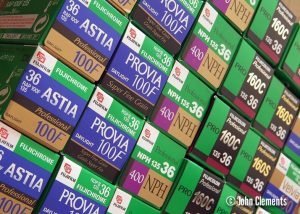 A New Kid On The Block…

Few using stand alone cameras have not heard of Fujifilm. But it was largely an unknown brand in the UK, until gaining momentum during the 1980s.

It was then I first came into contact with its products. And like many of professional peers and enthusiasts, they have served me well.

Largely a transparency (also known as slide or positive) film shooter for colour,  it was their colour negative film that first caught my attention. Not just for it’s lower (than Kodak) cost at the time, but also that certain colours did have a certain ‘zing’ to them.

Gradually I noticed in the following years (with some pride feeling ahead of the game), that Fujifilm emulsions started to sell steadily, eventually becoming the biggest selling brand in the UK.

I shot lots of film every week back then and well into the naughties. So alongside, I have thousands of Kodak Ektachrome images, and many more Kodachrome’s which I also liked a lot. Plus a good number created with Agfa’s Agfachrome. But Kodak and Fuji were my mainstay brands based on the numbers.

E 6 & More
FujiFilms transparency materials (Fujichromes) became the ‘go to’ option for many.

Kodachrome went though it’s own relatively complex process carried out by Kodak in Hemel Hempstead, then later in France. Fujichrome, Agfachrome, Ektachorme and the like, went through the E6 processes, which many labs could undertake.

I tended to use central London’s pro labs, ‘Metro’, ‘Joes Basement’ and quite often ‘Sky’. But as years passed, Primary Colour in EC1 as I had an account with them.

They also had for a while, a not so well known about studio space in the basement of  their initial Tabernackle Street location. As I also had an account and hired lighting from The Pro Center also in London’s EC1 five mins away,  this could be brought over and set up with relative ease logistically.

It made for some long sometimes intense, but certainly productive days using the lab upstairs to turnaround mostly Fujichromes in only 2 hours. Quicker if needed.

Sometimes I had a ‘clip tests’ where small numbers of frames are processed quickly to judge things like effective film speed and exposure. Occasionally I then decided to re rate the suggested ISO and ‘push or pull’ the E6 process. But that was rare. Most of the time I shot at the recommended ISO and bracket exposure by 0.3 EV if in any doubt, or simply as a safety net where 35mm film was concerned. Not so much with other formats.

Today, digital capture is more photographer friendly with instant playback and accurate histogram analysis. But having been involved with digital imaging since the late 1980’s, I also remain grateful for the invaluable learning curve film shooting was for me even in this largely digital capture age. The former simply made the latter easier.

Why Transparencies?
Most companies publishing my images were of the opinion that scanning a transparency was best.

My prefered choice in FujiFilm emulsions has in the main, not needed the very high contrast and colour saturation of Velvia film stock (although I shot a lot more than I thought looking back through my files). It would have been if I had been a landscape photographer though. But not with high contrast lighting.

So shot significant miles with FujiFilm’s ‘Provia’ family in its various forms. Both on location with ambient light, but also in the studio. I also have to say how much I enjoyed shooting with the companies ‘Astia’ film. The latter 100 ISO slide film I liked for its intended uses of people photography, particularly in the studio. Not for everyone’s taste by all means, but it’s slightly softer skin tones and less saturated colours, alongside a slightly lower contrast than Provia I just found more naturally pleasing. Especially with subjects having appropriately done make-up shot under the the control of studio lighting.

I shoot film far less these days of course. But there is still something about the analog process that feels like ‘real’ photography to me. Fujifilm stock has played a significant role in my career, and remains my first port of call when it comes to shooting with film in colour.
That said I should get around to shooting with the latest Kodak Ektachrome generation. Never say never and all that… I may find I take to it.