During the 1990’s and into the current century, I shot a lot on Hasselblad, mostly with the ‘V’ system, but also the developing ‘H’ system.

I was also flattered to do some work with them across a number of years. And even just a few years ago, to be involved in some interesting confidential discussions about potential future products.
To be honest, the day I decided to sell off my modest ‘V’ system (I hired mostly what I needed around it), is a day I have often regretted. 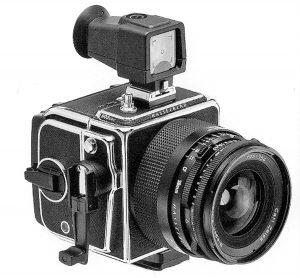 I remember reading last year a newsletter where the Zeiss Biogon lens was highlighted. Zeiss made most of the ‘V’ system optics over the decades, and the 38mm Biogon was a very famous, fixed lens on the front of various SWC (Super Wide Camera) models over the decades.

Modified bodies were used by NASA including this one. The reason was the wide angle of view, which equated to the 24mm focal lengths angle on a 135mm frame.
A combination that although niche, was used widely in landscape and architectural photography. To put it simply, optically speaking, the lens was a near symmetrical design. Virtually no distortion, sharp, it had legendary imaging performance and reliability.

As the SWC camera body had no reflex mirror, the lens could be positioned up close to the film plane aiding the overall technical performance, something we see now days of course as an often sited benefit of mirrorless digital cameras.

I hired the 903 SWC occasionally. But the use that most sticks in my mind was for something little unconventional…

Into The Dragons Den.
It was Saturday June 15th 1996. Not a date that will probably have any immediate resonance.

But passionate football fans will maybe remember the European Football Championships in England. And it was the day England were playing Scotland at Wembley in a knockout match. I noticed during ‘lock down’ a re run on TV. No not the actual match, just the recording (apologies to friends north of the border:).

While sports photographers were going to be at the Wembley stadium game, earlier in the day I and other photographers thought we would get ourselves to Trafalgar Square, where the Scottish fans ‘Tartan Army’ traditionally masses in central London. But unlike those with the usual 80-200mm f/2.8 type lenses, that at the time adorned pro 35mm cameras from Nikon and Canon mostly, I decided instead to tackle things differently. And get right into the crowd with this non reflex, manual focus (with no focus aid), medium format camera.

The reason I decided against the standard ‘press’ approach, and left my Nikon’s behind, was a feeling that the techniques I could employ, would in fact go largely unnoticed in a big crowd.
I had hoped to hire a black body version for a little discreteness, but non were available on the day from ‘The Pro Center’ in London, where I then had an account. But was I mad carrying instead the shiny chrome version of the camera, into a shall we say a happy vocal football crowd?

Possibly, and while I would caution anyone that their own and other peoples safety comes before any picture, there is a case for judging each situation after planning properly, and making a sensible decision there and then. And without wishing to be detrimental, there is often even more pressure when you are shooting professionally to take extra chances.

So, with my Minolta Flash Meter V (the camera has no metering built in), I gradually working from the outside the square, made my way slowly inwards choosing my moments. And also shooting sparingly as there were only 12 images on each 120mm roll of film (A12 back) in the 6 x 6cm square format. I got a few rolls that were a pleasure to capture.

I certainly have some fine memories and I think images to show from my time shooting with the ‘V’ system. Here are a few outtakes from the day.

Hyper Focal Distance.
Focusing was done based around the hyper focal distance technique. I have enjoyed using this skill from when I first learned it at the start of my photographic journey.
This was possible only down to the proper depth – of -field indications on the lens – something all Zeiss optics of the CF series had.

Sadly, as manufacturers try and guide users towards automation, many lenses today no longer have that information to work around, although with mirrorless cameras it is coming back in some options on display panels.

That said, when you have shot enough and practised, you get a ‘feel’ for this using a particular focal length, aperture and focus point, but it is obviously less precise.

For me it was a day of real photography. The photographer controls the camera, not the other way around. Traditional photographic techniques can still be used, and dovetail nicely with automation as a potential solution even today.

Using The Hyperfocal technique.
As you know, when a lens is focused, technically speaking it is only at one specific distance. And everything at that point is rendered sharp. But depth – of – field creates the illusion of sharpness as we can not tell at greater or shorter distances, that things are becoming less sharp. Obviously beyond a certain point and the becomes noticeable.  Changing the aperture is the main (but not only) way of varying depth – of -field.

And if your depth-of-field is maximised, it is possible with mostly wide angle and standard focal lengths for a given format, to get results where very close to the camera up to infinity is sharp. This is called the ‘hyper focal distance’ technique. In the past landscape shooters used it often.

Far quicker with little practice than it takes to read and understand, or mess about with single or super doper multi point AF options sometimes. And it leaves you with a feeling that you have just taken a picture:).