Wex Photo Video are hosting an exhibition by Peter Dench until June at thier London store.

Here we go with the details: 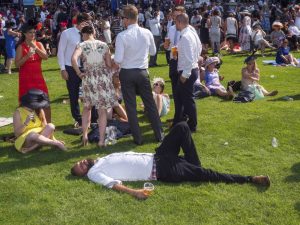 A man with his pint rests on the grass at Royal Ascot.
One of Britain’s most well-known racecourses, Ascot holds a special week of races in June each year called Royal Ascot, attended by The Queen. The week has become Britain’s most popular race meeting, welcoming around 300,000 visitors over five days, all dressed up in their finest clothes and hats.

A collection of previously unpublished work entitled ‘The English Summer Season’ by renowned British photographer Peter Dench will be exhibited at the Wex Photo Video Gallery from 30 April to 28 June 2019.

Taken over the last two summers, Dench has captured the spirit of typically English sporting events, such as Henley Royal Regatta, Cartier Polo, Epsom and Royal Ascot, which are now frequented each year by characters from all echelons of society. The humorous work portrays the eccentricities, colourful personalities and outrageous antics of spectators enjoying the generous hospitality on offer.

Peter Dench commented, “The events I’ve portrayed were once the preserve of the rich upper classes, but through the years, have become open to a much broader audience. The rules of society have been rewritten. With this reportage, my intention is to capture the humour, the entertainment and the downright craziness of the scenes I have encountered in a light-hearted but truthful manner.”

Throughout his 20 year career, Peter has become a widely recognised name thanks to his distinctive narrative and documentary photography shot in numerous countries around the world, with a particular focus on the quirks and behaviour of the English at home.

Tiffany Tangen, events manager at Wex Photo Video, commented, “Dench’s images are powerful, relatable and thought-provoking, and his ability to convey humour is light and refreshing. We were thrilled when Peter agreed to exhibit this collection at our Gallery, as it is unlike anything we have shown previously. We’re sure the subject matter will raise eyebrows and generate many smiles along the way!”

‘The English Summer Season’ will be held from Tuesday 30 April to Friday 28 June 2019 at the Wex Photo Video Gallery in London E1, with free entry.

About Peter Dench
Born in 1972, Peter Dench has more than 20 years’ experience in the advertising, editorial, corporate, portraiture and video fields of image making. He is also a presenter, writer, author and curator – and an official Olympus UK Visionary Photographer. A keen and astute observer of human nature and in particular some of the quirkier aspects of life, his distinctive, colour reportage style has guaranteed regular commissions from numerous respected international clients. Achievements include a World Press Photo Award in the People in the News Stories Category for the reportage Drinking of England, and participation in the World Press Joop Swart Masterclass. Football’s Hidden Story, a FIFA sponsored project comprising 26 stories across 20 different countries documenting the positive impact that football has had at grass roots level, received six global accolades.

Peter’s books include Dench Does Dallas (2015); The British Abroad (2015); Alcohol & England (2014) and England Uncensored (2012), which was a Pictures of the Year International photography book award finalist. In 2016, he published The Dench Dozen: Great Britons of Photography Vol. 1, featuring revealing insights into the lives and work of some of British photography’s most colourful characters. TV credits include ‘What is it to be English?’ and ‘Brexit Leavers’ Voices Burnley UK’ for Channel 4 News.

The exhibition is presented in association with Olympus UK. The images have been printed to A2 size on HP Satin with a Sandtex seal, wrap mounted to 3mm Dibond.

A limited edition magazine will be published to accompany the exhibition, and will be available to purchase from Wex Photo Video from 30 April to 28 June 2019.